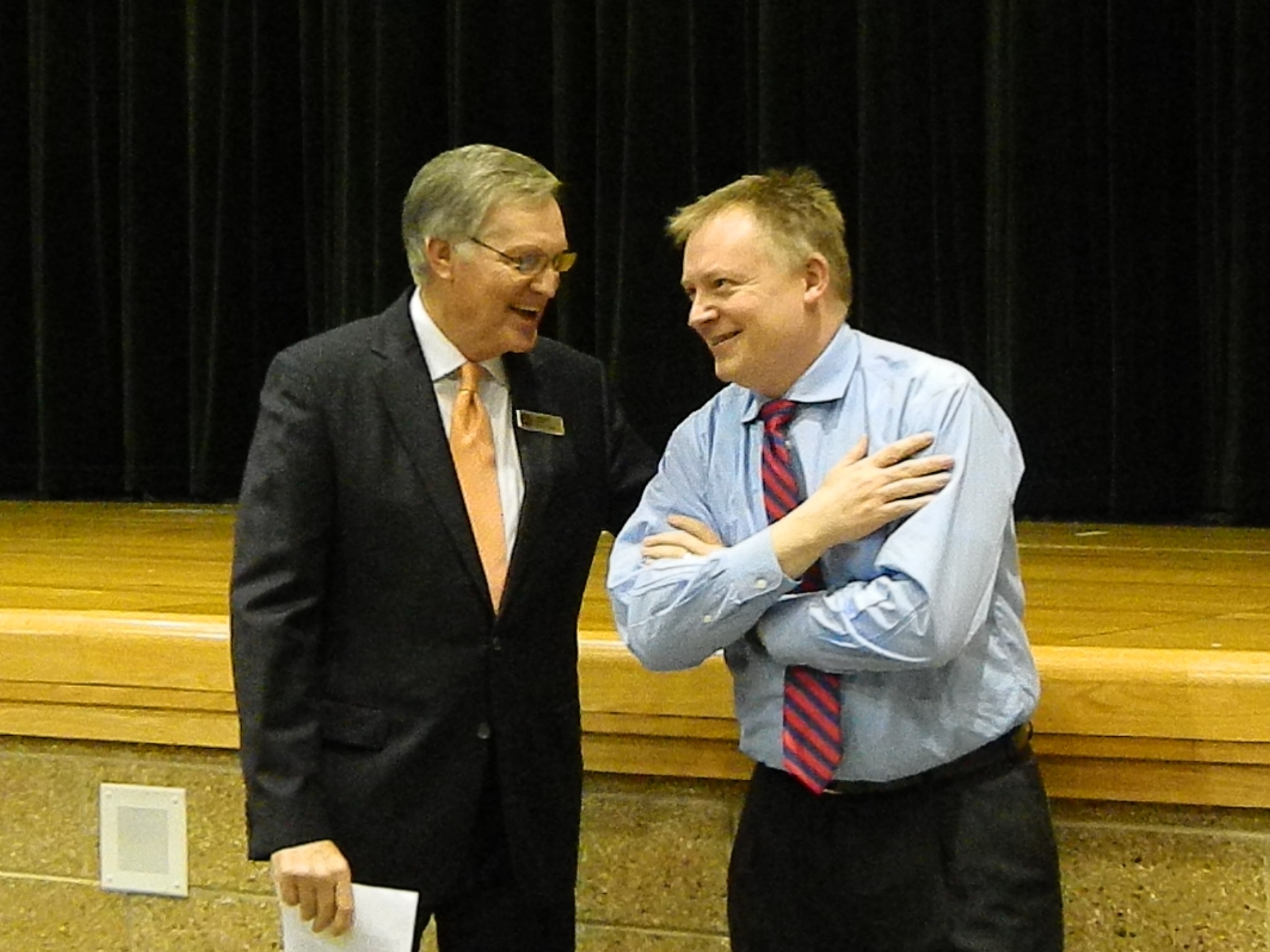 Chris Chlebek was a beacon of knowledge, support and inspiration to many of his students as a social studies teacher at (then) Plainfield High School.

So it is appropriate that Chlebek, now the assistant principal at Plainfield East High School is the 2017 recipient of the Lewis University College of Education’s Educationis Lumen (or, “Light of Education”) Award.

The award honors a professional educator and Lewis alum who has demonstrated “excellence in teaching, commitment to the finest Christian ideals of education and dedication to the teaching profession.”

Lawrence Wiers, Lewis University Assistant Professor -Educational Leadership and Director of School Partnerships announced the award to Chlebek at a surprise staff meeting on November 1, 2017. Chlebek will be formally honored at a December 6, 2017 ceremony at Lewis University.

Wiers, who also taught Chlebek at Lewis, praised his former student to his Plainfield East peers, and read from some of the letters recommending Chlebek for the award.

“Chris Chlebek is probably the most formative teacher I’ve ever had,” wrote one former student. “He not only cared about how I grew as a student, but as a person, as well. I wouldn’t be as successful as I am today without him.”

Another Chlebek student wrote, “(Chris) greeted students with a smiling face and understood that education was more than teaching about your specified content area. In the grand scheme of education, it’s not the content that you remember…you remember the people that took time to learn about you and bestow their wisdom upon you.

“Mr. Chlebek impacted countless lives and is a perfect representative (of) how a teacher should carry themselves,” the student wrote.

Chlebek started his education career in 1999 as a social studies teacher at Plainfield High School. He was hired by then-principal, now Superintendent of Schools Dr. Lane Abrell.

Abrell nominated Chlebek for the award.

“Chris inspirationally touched the lives of the many students he encountered,” Abrell wrote in his nomination. “Chris…preaches a student-centered philosophy that is focused on their success.”

Chlebek taught at PHS until 2005, then moved to Plainfield North High School when it opened in 2005. He served as Social Studies/English Division Chair for three years.