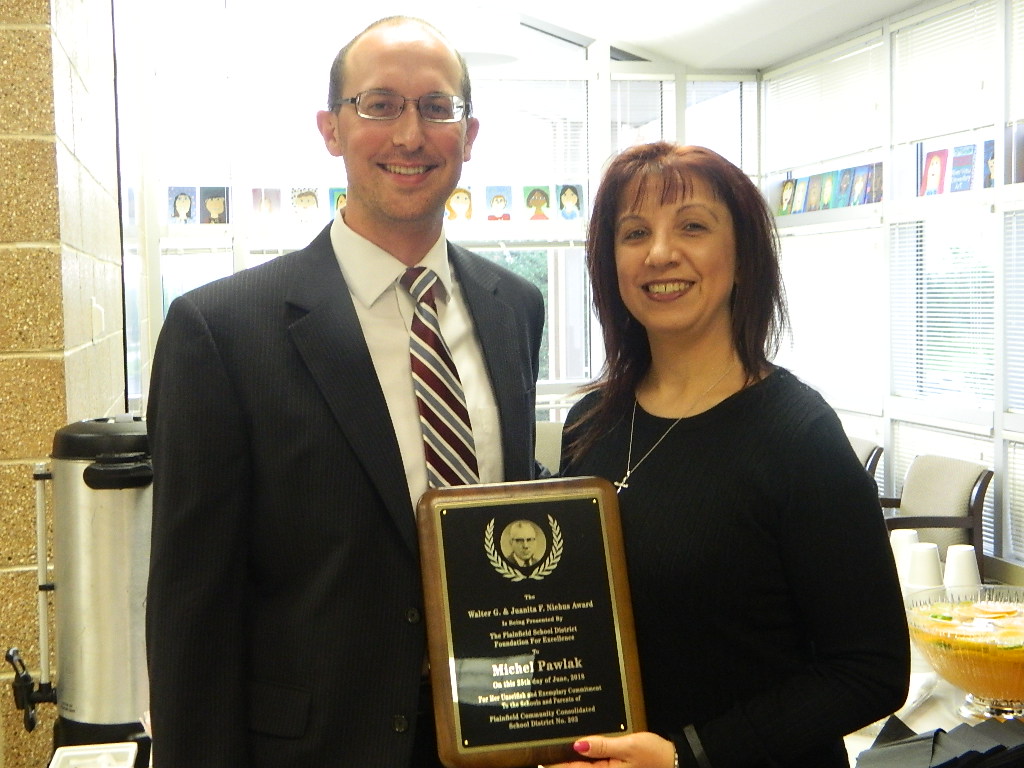 For 19 years, Plainfield East High School guidance counselor Michel Pawlak’s biggest goal has been building relationships with her students and their families.

Her dedication and efforts to meet that goal have earned her the 2018 Walter G. and Juanita F. Niehus Award. The Niehus Award honors certified or non-certified staff and support members who have shown extraordinary commitment to students, parents and employees.

“Whether as a teacher, counselor and fine arts director, Michel has helped students feel more comfortable, connected, valued and appreciated at school where our kids spend so much of their time,” Starr said.

“This is no small thing in today’s world, and for this, Michel most certainly deserves this honor,” he said.

Pawlak started her education career in 1999 in the Troy school district as a 7th grade communication arts teacher. She came to District 202 in 2000 as a language arts teacher at Timber Ridge Middle School.

In 2002 she moved to Drauden Point Middle School as an instructional technology teacher, then taught language arts there for five years before helping to open PEHS as an English teacher in 2008. Pawlak became a guidance counselor at PEHS in 2009.

No matter what grade, school or role, Pawlak has shown an amazing ability to connect with students, said PEHS English teacher Laura Shoplas, who nominated Pawlak for the Niehus Award.

“I have known Michel for 10 years. At all times she is cheerful and enthusiastic with students, parents and staff,” said Shoplas, who has also directed several plays with Pawlak.

“I have witnessed Michel help so many students who have seemed lost, and with her help, she has encouraged them to find their home at PEHS,” Shoplas said. “Michel brings real joy and enthusiasm to everything she is involved in,” she said.

Pawlak credits the students for her positive attitude and professional success.

“I have really enjoyed waking up every morning knowing that I would be spending my day working with students,” she said.

Educators, Pawlak said, take their students home in their hearts and minds. They know who goes above and beyond, who needs more support, which ones slip by and which ones resist their teachers’ efforts to help.

“Each and every student scenario can offer a challenge, but this is why educators come to work every day. It is what feeds and fuels our passion,” Pawlak said.

Despite the inevitable bumps in the road, Pawlak said she considers herself blessed.